This week’s ESD Q&A question: Question: Is there really a need for an ESD wastebasket?

It is fair to wonder why there is a need for ESD wastebaskets. If the waste basket resides underneath a workstation and stays there permanently, it is extremely unlikely that a wastebasket could present a danger to ESD sensitive devices, regardless of the field voltage that may exist on the basket. However, there are a number of circumstances  when the wastebasket could present a significant hazard to electronic products. The following are just a few examples of potentially risky scenarios: Work surface cleaning:   The operator lifts the wastebasket to the edge of the work station to collect the debris being removed. Should product be present on the work surface and not contained in a shielding container, there is a good opportunity for exposure to electrostatic fields that exceed safe limits. Lead trimming/board cleaning operations:   When trimming component leads or using aerosol cleaners on PCBs (Printed Circuit Boards), some operators will hold the PCB over the wastebasket to catch the clippings or solvent run-off. Many times the PCB will be placed well into the waste container to assure catching the unwanted materials. This operation puts PCBs and ESD sensitive devices very close to potentially significant electrostatic fields. Aisle proximity:  Some wastebaskets have been observed in close proximity to production floor aisles where product transfer carts pass or may be parked. ANSI/ESD S2020 requires items that generate 2000 volts or more (measured at 1” from the item) be kept at least 12” from ESD sensitive devices. Using ESD wastebaskets eliminates the risk of carts being parked next to static generating baskets. Taking out the trash:  The simple action of removing trash from the ESD sensitive area could generate a dangerous amount of static. Static is caused by movement, specifically friction. So moving the trash cans to empty them or removing the plastic trash bags from the can generates voltage and they could come in close proximity to sensitive components on the way out of the area. While company ESD policies may prohibit some of the actions mentioned above, it does not mean that they will not occur from time to time. ESD wastebaskets provided assurance that the wastebasket will never be an ESD threat to your product. What Do ESD Standards Say? The ANSI/ESD S20.20 standard says to remove all insulators from the ESD protected Area (EPA). There is nothing specifically mentioned in the standard about Trash Cans or Waste Baskets. But most trash cans as well as trash bags are plastic, which is an insulators that can generate significant charges. It is better to be safe than sorry when is comes to static damage which is why we developed ESD-Safe Trash Cans and Waste Baskets. Transforming Technologies offers three ESD wastebaskets in static dissipative polypropylene : We also supply a stainless steel ESD waste basket for clean room operations: If a liner is to be used for easier maintenance, Transforming Technologies offers them in both conductive and static dissipative. 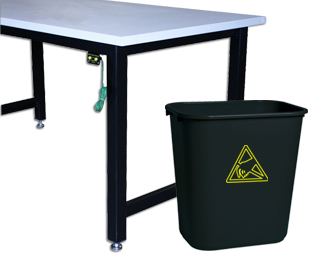