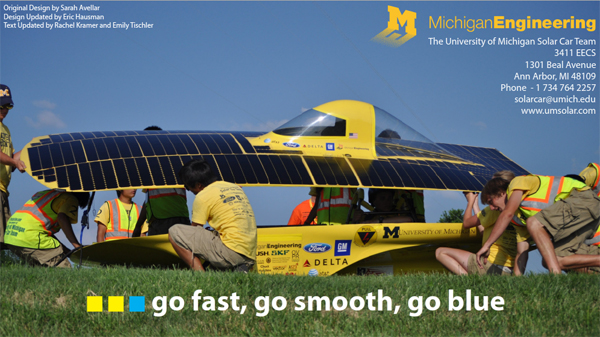 Transforming Technologies is proud to announce that we have joined a growing list of sponsors for the University of Michigan Solar Car project which aims to design, develop, finance and race a solar energy-powered car 1,800 miles across the Australian Outback this October as part of the World Solar Challenge. The team at Michigan will utilize a selection of Transforming Technologies’ Surface Mount Device (SMD) boxes, SMD Storage Cabinet and ESD Rubber Matting to protect sensitive components. “We think this is a fascinating project  that’s impact is seen in the ever growing and important sustainability movement” said Evan Clancy, a Transforming Technologies’ Senior Manager. “The University of Michigan is a great institution and we are overjoyed that our products will assist UMsolar compete in the World Solar Challenge”. The University of Michigan Solar Car Team (UMsolar) is an entirely student-run organization that designs and builds solar-powered vehicles. The team races both nationally and internationally. Since its establishment in 1990, the team has built 10 vehicles, won the American Solar Challenge six times, and placed third in the World Solar Challenge four times.  UMsolar is widely recognized as the most successful team in North America. For more information on the project visit: http://solarcar.engin.umich.edu/.  For donation information: http://solarcar.engin.umich.edu/donate/