Is Your Facility In Need Of ESD Training?

Because customer needs periodically include requirements for consultation, training, auditing or verification, we offer Professional ESD Services such as trainings or audits.

Please contact us for more information on our professional services and insure that your static control program is as effective and efficient as possible. 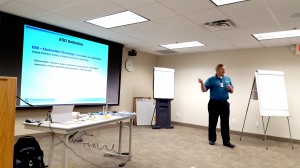 Contact us today for more information on ESD professional services

Because customer needs periodically include requirements for consultation, training, auditing or verification, we offer  Professional ESD Services, in cooperation with LBL Scientific.

Please contact us for more information on our professional services and insure that your static control program is as effective and efficient as possible.

The 2011 Annual Meeting of the Electrostatics Society of America will be held June 14-16, 2011, at Case Western Reserve University, Cleveland OH. Papers will be presented in all scientific and technical areas involving electrostatics, and Transforming Technologies is proud to announce that two of our associates work will be included in the event.

On Tuesday, June 14 at 2pm, Dr. Larry Levit of LBL Scientific will be presenting the paper “Generating Air Ionization With No Contaminating Particles”.  Written in conjunction with Doug Buyer of the ESD Company, the session will examine the performance of the Aphaboost technology, a hybrid alpha/electronic air ionizer. Below is the abstract:

Abstract—Modern semiconductor manufacturing employs air ionizers to reduce the effects
of static charge. These effects are contamination control from electrostatic attraction and on
physical damage from discharges. Conventionally, air ionization is generated by corona from
needle electrodes, but there are particles generated by this process. In the past, these particles
have been too small to affect the manufacturing process, but this is no longer true. The latest
small structures on the wafer have reached the limit where these particles will harm the product.
This paper discusses the mechanism for particle creation and presents a design which
creates no particles.

The following is an excerpt from the article “Static Electricity in Cleanrooms” by Lawrence B. Levit, Ph.D., founder of LBL Scientific. He has worked in the static charge control industry for over 15 years. Levit is a senior member of the ESD Association, a senior member of the IEST and sits on the Board of Directors of the SiVa ESD Society and is the chair of WG22 of the IEST. He holds 6 patents in the area of ESD control.

Introduction
Static electricity is often overlooked in cleanroom environments and the results of this oversight can cause a reduction in profitability. In some factories where the effects are not studied and understood, they are dealt with by budgeting a reduction in production yield for unforeseen issues. Static charge and its effects certainly can be understood and it can be kept in check. The purpose of this article is to remove the “Black Magic” from the issue, explain how it affects the manufacturing process and discuss remedies

What is special about a cleanroom?
A cleanroon is a unique environment. For many applications it is regulated to a low relative humidity (RH) to optimize the process. Much of the particulate contamination is excluded by massive amounts of air filtration involving high efficiency particulate air (HEPA) filters. Objects in the cleanroom are wiped down before they can enter into the room. As it turns out, these actions are very good for maintaining an ultra clean environment but they are also the prescription for achieving massive levels of static charge in a cleanroom.

It is well known that static charge is created efficiently in a low humidity environment. It is commonplace for individuals to get stung by a spark when they reach for a doorknob in the winter time. Buildings are heated and lower RH results from the temperature rise. This same effect causes the rate of static charge generation to be higher in a cleanroom, especially a low RH cleanroom, than in a conventional room.

Once static charge has been generated by contact with other materials, nature has several methods to dissipate the charge. The first mechanism is conduction of this electrical charge to ground through any surface contamination on the object. Normally, such contamination, for example oil from a person’s hands, is removed from the object before it enters the cleanroom and the object remains clean because the products are only handled by gloved hands.

The only mechanism remaining for the natural dissipation of surface charge is the presence of ions in the air. These ions are created by naturally occurring radioactivity and by other items like runner water and electrical motors. Unfortunately, ions cannot pass through a HEPA filter – they are attracted electrostatically to the materials of the HEPA filter – so they are removed from the air entering the cleanroom.

For the full article and to learn how to control ESD in a cleanroom, follow this link to “Static Electricity in Cleanrooms.”

Levit graduated from Case Institute of Technology, Cleveland, Ohio with a BS degree in physics with honors.  In 1970, he earned a Ph.D. in Experimental High Energy Physics from Case Western Reserve University. He can guide you to a more profitable factory by eliminating the sources of ESD damage, mitigating microcontamination issues and identifying EMI from ESD that is effecting your robotics and automated test systems. Contact LBL Scientific by Phone at 925-788-2969.